This April 4th I will tell about a peculiar Norwegian character, the sculptor Gustav Vigeland. As I have mentioned earlier, a fellow blogger of the 21st ct. considers any depiction of what Americans call cowgirls obscene. I will thus draw upon an example that could not have been more relevant – a person whose life coincided with that of the NSDAP!

The next part is cited from this admittedly shady blog.
http://prayandwork4princess.blogspot.com/2013/06/femdom-sculpture-gustav-vigeland.html

Norwegian sculptor Gustav Vigeland (1869-1943), a contemporary of Edvard Munch, frequent visitor of Auguste Rodin’s studio in Paris, is famous today for his sculptures in 80 acres big Vigeland Sculpture Park in Oslo. In 1921 Oslo decided to build him a studio, give him all that he needed and in exchange the city is going to own all his works from then on. The park with more then 200 Vigeland’s sculptures (over 600 figures) became a major tourist attraction in Norway.

Incidentally, his central column was completed in 1943. It reminds me of Rowling’s sequence in Harry Potter – although the Oslo scupture does not serve as a pedestal for man, man himself in all his variations is a pedestal for… what? The heavens?

Harry looked more closely and realized that what he had thought were decoratively carved thrones were actually mounds of carved humans: hundreds and hundreds of naked bodies, men, women, and children, all with rather stupid, ugly faces, twisted and pressed together to support the weight of the handsomely robed wizards.

And now the word goes to Wikipedia.

Some art critics considered Vigeland’s sculptures to be expressions of nazi or fascist aesthetics, and he has been compared to Arno Breker. Writing in Verdens Gang, a newspaper started by former Norwegian resistance members shortly after the German occupation of Norway ended in 1945, Pola Gauguin wrote that the Vigeland installation “reeks of Nazi mentality.”

In the autumn of 1927 a block of granite weighing several hundred tons was delivered to the park from a quarry in Halden. It was erected a year later and a wooden shed was built around it to keep out the elements. Vigeland’s plaster model was erected next to it for reference. Transferring the design began in 1929 and took three masons 14 years to accomplish. The Monolith was first shown to the public at Christmas 1944, and 180,000 people crowded into the wooden shed to get a close look at the creation. The shed was demolished shortly afterwards. The Monolith towers 14.12 metres high and is composed of 121 human figures rising towards the sky.

The latest addition to the park is a statue titled Surprised (Overrasket), originally completed in plaster in 1942 only months before one of the models for the work, Austrian refugee Ruth Maier, was sent to Auschwitz and killed. A bronze cast made in 2002 is now installed in the park.

Vigeland, on the other hand, invited Nazi officers to his studio, and commented that he was happy that the occupying forces found strolling in Frogner Park amidst his sculptures to be so pleasant a pastime. Behavior like this helps to explain why Norway’s greatest sculptor seems to command cool respect rather than warm admiration.

I don’t know. Certainly Vigeland’s later work doesn’t line up with Nazi ideals of physical perfection. And if there is something anonymous and vaguely totalitarian about the monolith, then the boxy, granite figures that surround it seem to me, if not individualistic, then for sure, eminently human. In fact, these sculptures, especially the ones featuring elderly men and women, were the only ones in the entire park that made any kind of positive emotional impact on me. If Vigeland’s work isn’t a celebration of the diversity of the human experience, it does seem to recognize, at least here, the complexities of the human spirit. But, as ever, Vigeland is sphinx-like on whether this is a good or bad thing.

Even now, I still can’t really say if I liked the sculpture installation, or if I was just awed by it. And yet I’m pretty sure that, should I find myself back in Oslo, I would make a point of revisiting it.

On reading this, a thought occurred to me – what if ideological differences must be resolved not by arcane reasonings of pompous ideologues, but… by the normie masses! Has a Christian NPC ever failed to smell a racist? I myself get outed constantly, even when I do not use trigger words. The simpleton’s mouth speaks the truth.

The picture used is a screenshot edit I have made of this photograph by Wernher Krutein.
https://fineartamerica.com/featured/statues-steps-the-column-vigeland-sculpture-park-in-oslo-wernher-krutein.html 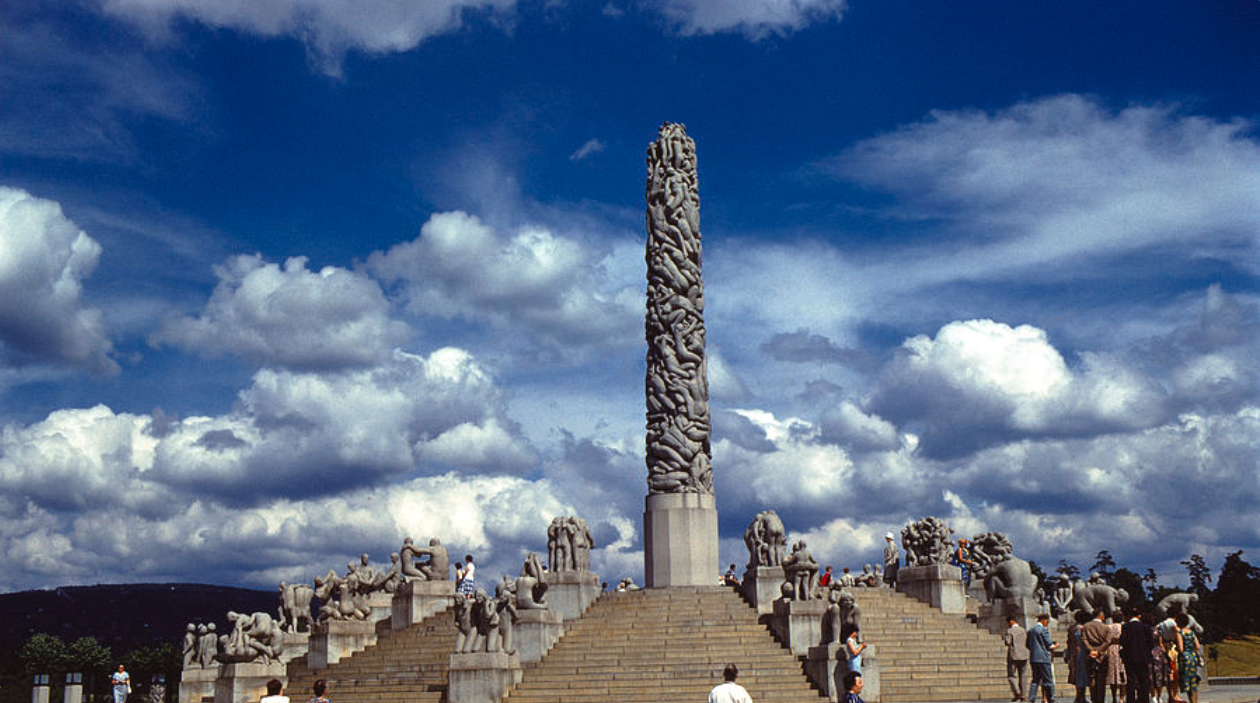